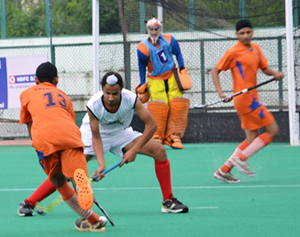 Jammu (Jammu & Kashmir), 13 May 2015: Marching towards the semi- finals of the tournament, the top teams showcased brilliant performances at the Hockey India 5th Sub Junior National Hockey Championship 2015 (Men) 'B' Division today. In Pool C, Hockey Patiala beat Citizen Hockey XI by 2-0 and entered the Semi-Finals of the Championship. Another Semi-Final match, Dadra & Nagar Haveli Hockey Association has qualified whereas the fourth semi-final team will be decided tomorrow through Penalty Shoot-out between Chandigarh Olympic Association and Hockey Bihar.

The day started on a winning note for Chandigarh Olympic Association who edge past Hockey Jammu And Kashmir 12-1.The second match of the day witnessed a victory for Hockey Patiala over Citizen Hockey XI 2-0. In the last and the third match of the day it was Hockey Bihar who stood successful in beating Vidarbha Hockey Association 20-0.

In the Pool C match, Hockey Patiala beat Citizen Hockey XI by 2-0 which was possible due to brilliant field goals by Rahul and Sandeep Kumar. Lady luck smiled on Hockey Patiala, when in the 5th minute, Rahul outfoxed the opponent's defence, to score a magnificent field goal. Citizen Hockey intensified their efforts to break through Patiala's defence but failed to equalise in the first half. In the second half, Hockey Patiala maintaining their intensity, found an opening in the 52nd minute when Sandeep Kumar skilfully dribbled past the defenders and scored a beautiful field goal doubling their lead. Eventually, Hockey Patiala won the match by 2-0.

In the last Pool B match of the day, Hockey Bihar nailed down Vidarbha Hockey Association by a mammoth margin of 20-0 with the help of Binit Ekka's marvellous eight goals, Sunil Mundu's spectacular four goals and Anthony Mudu's brilliant hat-trick. Bihar dominated the match from the first minute and was leading by 12-0 after two quarters. Vidarbha failed to catch-up the high-level skills of Bihar and they eventually lost the match by a huge margin of 0-20.

Results of the Day