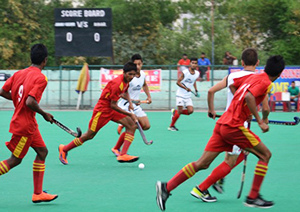 Jammu (Jammu & Kashmir), 12 May 2015: In the five hockey matches played today, the crowd at the stadium witnessed a number of gripping games between the teams who played with an intention to defeat their respective opponents.

The first match of the day witnessed a win for Mumbai Hockey Association Ltd who defeated Goans Hockey 10-0. The second match of the day was in favour of Bengal Hockey Association who won against Citizen Hockey XI 3-0. Followed by this, was a win for Chandigarh Olympic Association who enjoyed a wonderful triumph against Hockey Himachal with 15-1. Hockey Puducherry managed to bag a win 3-1 against Hockey Uttarakhand in the fourth clash. The day concluded with a victory for Hockey Bihar who thumped Hockey Jammu & Kashmir 10-2.

In the Pool A match Mumbai Hockey Association Ltd thumped down Goans Hockey 10-0 and this was possible because of Ameen Rogay, Satyam Yadvav and Captain Tikaram Thakulla's hat-trick. Mumbai Hockey opened the account in the 6th minute when they were awarded a penalty corner, which was successfully converted by the captain Tikaram Thakulla. In the 30th minute, Ameen Rogay dribbled past the opposition's defence and scored a smashing field goal taking the score to 2-0 by the end of first half. Mumbai Hockey not giving any chance to their opponents doubled their lead in the 37th and 48th minutes by a masterful brace by Satyam Yadav. Goans Hockey desperate to open their account, counter attacked but failed to get past the opposition's line of defence. In the 49th minute, Captain Tikaram Thakulla scored the fifth goal for his team. In the 52nd and 57th minute, Ameen Rogay by effective conversion of a penalty corner and a field goal took the score to 7-0. In the 62nd minute, Shreyas Dhupe scored his first goal for the team. Mumbai Hockey demolished Goans Hockey by a field goal and conversion of penalty corner in 63rd and 65th minute by Satyam Yadav and Captain Tikaram Thakulla. By the final whistle, Mumbai Hockey won the match by 10-0