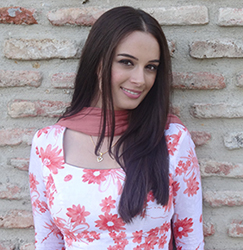 Mumbai, May 11, 2015: The lead actress of the upcoming romantic film 'Ishqedarriyaan', Evelyn Sharma is well known to Bollywood. The gorgeous actress has had a couple of successful films is her kitty since her Bollywood debut in 2013, like 'Yeh Jawaani Hai Deewani', 'Yaariyaan', 'Main Tera Hero' & and is currently seen in a lead opposite Sunny Leone in the comedy movie 'Kuch Kuch Locha Hai'. Come 15th May, fans will finally get a chance to see Evelyn in the first solo lead role of her career with 'Ishqedarriyaan' where she plays Lovleen, a shy village girl, paired opposite Mahaakshay Chakraborty.

Previously, she has always been a part of films that have had multiple star casts but, in 'Ishqedarriyaan', Evelyn is the star of the show. The beautiful actress has been appreciated for her acting skills in her earlier films and with this film; she hopes to showcase to her audience a different side to her personality. Speaking about her role the actress said, “Ishqedarriyaan is a big game changer for me as I have wanted to try out different genres. When I was preparing for the role of Lovleen I felt like I was discovering myself.”

The film talks about love and relationships, portraying the romance in its true sense. Actors Evelyn and Mahaakshay are perfect as the two people deeply in love and the music has proven to be a chart buster already. 'Ishqedarriyaan' is a romantic drama directed by V. K. Prakash, presented by Chariot Films & Metro Studios LLC (Georgia) & produced by Rajesh Banga. The film is set to release on May 15, 2015.