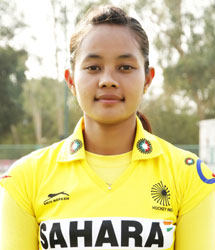 Focus is on our first clash against China at the Hawke's Bay Cup. Will take each game at a time: Sushila Chanu

New Delhi, 06 April 2015: The Indian Women Hockey team is all set to leave for New Zealand tomorrow to take on the challenge of the Hawke's Bay Cup. High in confidence post their back to back wins in the recently concluded Women's Hockey World League Round 2, the team is excited and waiting for the all important upcoming tournament. Playing their first match with China on 11th April 2015, which will mark their outing at the tournament, the team will play to start the tourney on a winning note.

The team with a visibly strong line-up in all departments will aim at taking on the opponents head on.

Speaking on the upcoming tournament Sushila Chanu said, “We are not allowing our last unbeaten win during the Women's Hockey World League Round 2 effect us. While we are high on confidence but we are not forgetting the fact that we are due to meet teams like Australia, New Zealand and China. We are looking at one match at a time and our focus presently is our first clash against China. They are a strong team, but we are positive of a win. The plan is to look out the initial opportunity to score and this will help put pressure on them. ”

The preparatory camp, which commenced on 22nd March and will conclude on 7th April with the players practicing hard on their game as the tournament plays an important platform to gain experience before the FINTRO Hockey World League Semi-Final Round (Women), Belgium this year.

The Hawke's Bay will be played from 11 April 2015 – 19 April 2015 and eight teams will be seen fighting it out for the title. India will play their first match against China at 6.00 AM IST on 11 April 2015. The matches will be LIVE Streamed on www.hockeyfestival.nz.