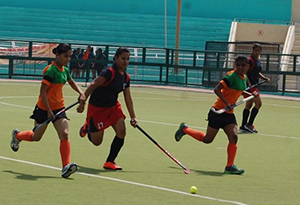 Saifai (Uttar Pradesh), 28 April 2015: In the 5th Senior National Hockey Championship 2015 (Women) 'B' Division Semi-Finals today, Hockey Patiala edged past Association of Indian Universities (AIU) by 2-1 and Hockey Madhya Pradesh outplayed Hockey Bihar by 2-1. It will be high-intense clash between the top teams - Hockey Patiala and Hockey Madhya Pradesh in the Final of the tournament tomorrow.

In the 1st Semi-Final match, Hockey Patiala edged past Association of Indian Universities (AIU) by 2-1 with the help of Captain Kulwinder Kaur's brilliant brace. It was Patiala's Kulwinder who scored the first goal of the match in the in 7th minute of the match after she sneaked into opponent's half and sent the ball into the net. However, their joy was short-lived as in the 14th minute, AIU's Jasreet Kaur managed to enter into the D by dribbling past opponent's defenders and hit the ball into the goal-box to equalise the score-line 1-1. After the goal, both the team fought neck-to-neck to score the winning goal. In the 29th minute, Patiala earned a crucial penalty corner and Kulwinder converted it perfectly into the winning goal. With this goal, Hockey Patiala defeated Association of Indian Universities by 2-1 and entered in the Final of the tournament.

In the 2nd Semi-final match, Hockey Madhya Pradesh outplayed Hockey Bihar by a narrow margin of 2-1 in an intense tussle. Madhya Pradesh drew the first blood in the 5th minute of the match when Jyoti Pal entered into the opponent's half and scored a stunning goal to take early lead of 1-0. However, Bihar counter-attacked aggressively and managed to earn a penalty corner in the 12th minute, which was perfectly converted by Priti Singh to equalise the score-line 1-1. After conceding the goal, Madhya Pradesh charged with full force and they got the success in the 24th minute when Rakhi Prajapati sent the ball in the goal-box to score. With the winning goal, Madhya Pradesh reached the Final of the tournament and will face Hockey Patiala in the neck-to-neck clash.

Results of the Day