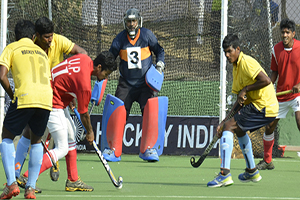 The finals clash of The 5th Senior National Hockey Championship 2015 (Men) Div - A will be telecast LIVE and exclusive on DD Sports.

Pune (Maharashtra), 26 April 2015: The 5th Senior National Hockey Championship 2015 (Men) Div- A, being played at Pune, Maharashtra, today witnessed an intense battle between four teams to book a berth in the finals.

Reaching the finals of the tournament, Railway Sports Promotion Board will be seen battling against Uttar Pradesh Hockey to fight for the title while Air India Sports promotion Board and Hockey Gangpur-Odisha will be fighting for the 3rd and 4th position.

The crucial day for the teams begun with a victory for Railway Sports Promotion Board which pulled down Air India Sports Promotion Board 6-4 making their way to the finals. The second Semi-final clash was a one sided game which resulted in favour of Uttar Pradesh Hockey who was seen defeating Hockey Gangpur -Odisha 3-0 and to march for the finale clash.

Results of the day: