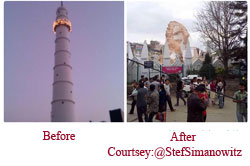 Two major earth quakes jolted Nepal and other parts of India. Due to quakes historic Dharahara Tower collapses in Nepal and hundreds of people are feared to be trapped.

There are reports of major destructions from Nepal.

There has been reports of major damages to many historical building from Nepal.

In India Earth quakes felt in almost all parts of North India and felt in Delhi, UP, Bihar.

There are reports of damages in India also.

The Prime Minister, Shri Narendra Modi, has convened a high level meeting with Ministers and top officials at 3 PM in the wake of the situation arising due to the Earthquake.

The Prime Minister has spoken to the Chief Ministers of Uttar Pradesh, Bihar, Madhya Pradesh and Sikkim, in connection with the Earthquake.