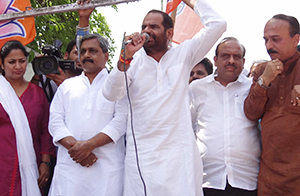 Vijender Gupta said that the political journey of Shri Kejriwal started with the tragic death in road accident of a worker Ms. Sunita Koli and after witnessing the scene wednesday it seems that Shri Kejriwal's politics is only to exploit the public sentiments.

New Delhi, 23rd April. Thousands of Delhi BJP workers staged a strong demonstration at ITO today protesting against the carelessness of the Aam Aadmi Party leaders including the Chief Minister leading to the suicide of a farmer in the presence of Chief Minister in Kisan Rally at Jantar Mantar by Aam Aadmi Party.

Under the leadership of Pradesh President Shri Satish Upadhyay a large number of leaders and workers of the party assembled at Shahidi Park of Delhi Gate area and marched towards the Delhi Government Secretariat raising slogan Kisan Ke Hatyare Kejriwal, Istifa Do-Istifa Do. Trying to stop the workers at the barricade put up near Times Building the Delhi Police used water cannon but the enthusiastic workers crossed the barricades and proceeded towards ITO. At this point the police lathi charged the demonstrators and arrested them near Pyarelal Bhawan and put them in various buses.

When the police stopped the workers from turning towards the Secretariat at ITO the workers sat down at ITO crossing and raised slogans for the resignation of Kejriwal. Even after being taken into custody the workers continued to sit at ITO crossing and refused to board the Bus. They walked on foot from Rouse Avenue to Kamla Market Police Station. A BJP worker Dr. Amit Nagpal sustained a serious injury in his eye due to the use of force by the police and he was given treatment in the police dispensary.

Addressing the workers assembled at Shahidi Park Pradesh President Shri Satish Upadhyay said that the way in which the politicians of Delhi witnessed the tragic suicide of a worker under the influence of political selfishness, they have lost their right to remain in power. He also said that on wednesdayShri Arvind Kejriwal not only failed to discharge his political and administrative responsibility but he also committed murder of humanity by continuing his speech in spite of getting information at the dais about the tragedy.

Shri Upadhyay has said that it is the responsibility of the organisers to take care of the safety of the workers participating in the political rallies but on wednesdayit seemed that the AAP leaders and workers present on the dais wanted to get political mileage by sacrificing the life of that farmer. When the Pradesh President started demanding the resignation of Chief Minister Arvind Kejriwal on the yesterday's incident, the slogans demanding the resignation of Kejriwal echoed outside the Shahidi Park also. Shri Upadhyay said that the real face of members of Aam Aadmi Party who have been claiming to be upholding morality was seen today again when not a single leader of this party participated in the last rites of farmer Gajender Singh.

BJP National Secretary Sardar R.P. Singh said that it very sad that the Chief Minister who indulges in dialogues even on small matters could not talk to the person trying to commit suicide in the presence of the Aam Aadmi Party workers.

Leader of the Opposition in Delhi Legislative Assembly Shri Vijender Gupta said that the political journey of Shri Kejriwal started with the tragic death in road accident of a worker Ms. Sunita Koli and after witnessing the scene on wednesdayit seems that Shri Kejriwal's politics is only to exploit the public sentiments.

MP Shri Ramesh Bidhuri said that this tragic incident has not only exposed the politics of Shri Kejriwal but also proved that he is not an agitator but an anarchist leader. Demanding the resignation of Chief Minister he said that now the BJP workers shall fight against all the anti people activities of this anarchist Government.

MP Shri Pravesh Verma said that the farmers are very much agitated due to the way in which Shri Kejriwal called an assembly of his regular workers in the name of Kisan Rally on wednesdayand he stage managed the suicide of a farmer. I fully understand the pains of a farmer being a son of farmer myself and demand that Shri Arvind Kejriwal as the Convener of the Rally should immediately give compensation to the family members of that farmer.