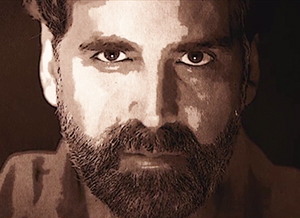 Mumbai, April 21, 2015: After popular tracks like Arijit Singh's Teri Meri Kahaani and Yo Yo Honey Singh's Aao Raja, comes the title track Warna Gabbar Aa Jayega from Akshay Kumar's much-awaited film ‘Gabbar Is Back'. The video of the song, that released today, is a brilliant compilation of VFX scenes, hard-hitting lyrics and peppy music. It features the Khiladi of Bollywood A.K.A. 'Gabbar' as he fights for justice on behalf of the common man.

With words like “Bure kaam ka bura nateeja, sudar ja saale' the title track perfectly defines the message this film aims to convey. This video includes snippets from the film combined with advanced visualizations adding a new zing to the song.

The song is a catchy tune composed by the talented Manj Musik. Singer Manjeet Ral has lent his powerful vocals to this memorable track along with rap by Raftaar. It has been written by Manj Musik, Raftaar and Big Dhillon. The music of the film has been ruling charts since its release and this song is sure to do the same.

'Gabbar Is Back' is directed by famous director from the South, Krish and produced by Sanjay Leela Bhansali and Viacom 18 Motion Pictures. Featuring Akshay Kumar and Shruti Haasan, the film is slated to release on May 1, 2015.

View More : 'Gabbar is Back'