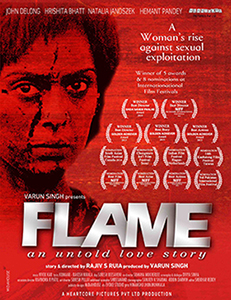 The poster of the upcoming movie 'Flame - An Untold Love Story' released by the Producer Varun Singh and Director Rajiv S Ruia. This poster of the movie is mainly in red color.

Producer Varun Singh and Director Rajiv S Ruia unveiled the first look of the movie "Flame - An Untold Love Story". The movie portrays a tribal woman who crosses the barriers of rituals, relations and social barriers to stand for her beliefs and love. Actress Hrishitaa Bhatt will be seen in her strongest character ever. The poster of the movie shows the red color of anger and love both. The Flame movie story revolves around a Mahua who is married to an exorcist has been through pain all her life but finally true love gives her the reason to discover the real strength of a woman. It is a journey of a sweet, innocent and beautiful tribal woman Mahua, who gets humiliated and assaulted on a daily basis by her husband, Ojha. A story of the transformation of a simple meek woman who blooms into a confident human being and finds the strength to fight for her belief, love and humanity. The movie have got rave reviews in many festivals worldwide.

"Flame - An Untold Love Story" is a commercial movie -narrative that features Hrishitaa Bhatt, Hemant Pandey, Miss Poland Natalia Janoszek, Shekhar Gijare and Hollywood actor John Delong. "Flame has gone very far and created an worldwide sensation, Now it is coming in India to light up the fire within. Flame is all about Love and respect that women should get from men. Men respect the women they love. Most men do not love women they cannot respect. " said Director Rajiv S Ruia