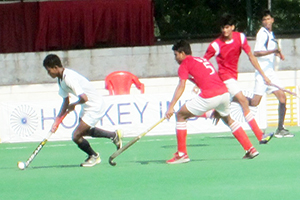 Hockey Haryana playing against Hockey Unit if Tamil Nadu made their intentions clear from the word go. They scored as early as the 4th minute as Sahil Dabas in a field effort edged the ball past the goalkeeper and giving his team the lead in the game 1-0. Hockey Haryana continued its dominance as in the 18th minute the score was doubled in their favour as Somjeet added another to the tally. While Hockey Unit if Tamil Nadu tried to keep the opponents at bay Hockey Haryana added two more goals before the end of first half and was leading the game 4-0. The second half yielded the same story as Hockey Haryana scored their fifth goal in the 40th minute Sanjay converted through the penalty corner opportunity. Already on a high with their 5 goal lead, Hockey Haryana scored two more goals in the 48th and 68th minute as they went on to win the match 7-0.