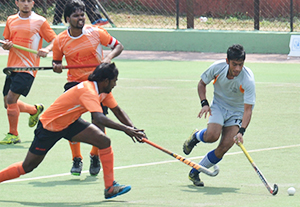 Pune (Maharashtra), 17 April 2015: The ongoing 5th edition of the Hockey India Senior Men National Championship 2015 (Div A) in Pune today saw the one-sided Pool matches where Railway Sports Board outplayed Hockey Punjab 3-1 and - Hockey Karnataka edged past Food Corporation of India by 3-2 in Pool D matches. In other matches, Air India Sports Promotion Board blanked Sports Authority of India by 3-0 in Pool A and Uttar Pradesh Hockey thrashed Services Sports Control Board by 5-1 in Pool C.

The first match of the day in Pool D between Railway Sports Board and Hockey Punjab was an intense clash with the former dominating and winning the match by 3-1. While the first two quarters of the match was a dry run as both the teams kept the pressure on each other and looking for the scoring opportunities. It was the defence of both the teams which won the first half as they did not allow any goal to be scored. The third quarter saw some action as both teams finally opened their accounts. Railway Sports Promotion Board's Yuvraj Walmiki entered the D and flicked the ball into the nets giving his team the lead in the game in the 31st minute. Within five minutes (36th minute), Talwinder Singh doubled the lead as he scored a brilliant field goal and helped his team to take the score to 2-0. In its effort to minimise the goal score, Hockey Punjab successfully capitalised on a penalty corner in the 43rd minute and the score was 2-1 in favour of Railway Sports Promotion Board. Not wanting to lose the hold on the game, Railway Sports Promotion Board added one more in the tally as they scored their third goal in the 59th minute marking Yuvraj Walmiki's second goal for the match. The goal proved to be the winning and final goal of the match as Railway Sports Promotion Board won by 3-1.

Another Pool D match witnessed a neck to neck competition with a win for Hockey Karnataka over Food Corporation of India 3-2. The match started on a very exciting note where both the teams had a tough tussle to earn the first goal of the match. On the other side, Hockey Karnataka broke the silence and opened the account with the field goal by Pramod PV in early 7th minute of the game. Food Corporation of India also attacked back and in the 9th minute of the match, Karambir equalised the score-card with a brilliant field goal. From here, Hockey Karnataka dominated the match and Kusha JP and Sheshe Gowda BM converted two penalty corners in 48th and 53rd minute respectively, showcasing match-winning performance. Food Corporation of India also tried hard to give a tough competition to KRA and in 59th minute Munish Rana earned the second goal for his team. Howver, unfortunately unable to equalise the score-line and Hockey Karnataka kept the domination on score table with the final score 3-2.

In the second match of Pool A, Hockey Odisha thrashed Hockey Andhra Pradesh by a huge margin of 8-2 in one-sided tussle. Odisha started the match with their domination and earned the first penalty corner in the 11th minute, which was perfectly converted by Amit Lohchab. Just after three minutes (13th minute), Odisha earned another penalty corner and Amit's team-mate Dilip Toppo effectively converted it into the second goal. After conceding two goals, Andhra Pradesh counter attacked against their opponents and managed to contain the game in Odisha's half. In the second half, Odisha men broke the defense line-up and earned another penalty corner. This time again, Dilip converted the opportunity perfectly and extended the lead by 3-0. In the next minute (41th minute), Odisha's Sunil Toppo charged towards opponent's half and scored a brilliant goal of the match. Maintaining an attacking game, Odisha's Joseph Toppo and Arbin Barla scored two back-to-back goals in 45th and 49th minutes respectively and increased the lead by 6-0. Trailing by a huge margin, Andhra Pradesh came back to their counter-attacking game and Sandeep Raju Sammeta scored the first goal for his team in 51st minute. However, Odisha's Rajin Kandulna replied back strongly in the next minute (52nd minute) and scored the seventh goal for his team and took the score-line to 7-1. Andhra Pradesh maintained the last minutes battle as Sandeep Raju stroke back to score another goal in 54th minute and reduced the margin by 2-7. In the 55th minute, Joseph scored the eighth goal for his team and sealed a thumping 8-2 victory over Andhra Pradesh.

Results of the Day-

OTHER TOP STORIES
Inspiration4 Crew returns to earth
NDA is being prepared for Women Cadets, says the Government to the top court
BJP will not fight for the Rajya Sabha seat from West Bengal
New OPPO A16, released as a budget option
Punjab's new CM takes office, after Amarinder Singh’s resignation
New Ikea product to give any desk or shelve wireless charging feature