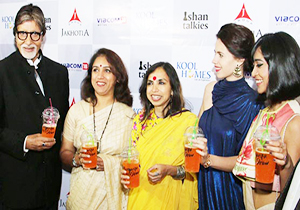 The screening was a star-studded affair where celebrities came in large numbers to support the film. A film by Sonali Bose, 'Margarita, With A Straw' and has already reached various film festivals like Toronto, Busan, Cannes amongst others winning recognitions to its credit like the best actress and the best film awards. The film has been applauded for its heartwarming story and unbiased approach at various issues of society.

Some of the accolades received on twitter are: Director Farah Khan loved the film and said, “Just saw #MaragaritaWithAStraw .. It's a 2 hero film..Director Shonali Bose n actress kalki koechlin..!! Take a bow”

Calling the film a moving experience actress Soni Razdan tweeted, “Margarita, With A Straw...one of the most sensitive entertaining and moving films I have seen, brilliantly directed by Shonali Bose, so proud!"

CEO, Colors, Viacom18 Mr. Raj Nayak said, “Watched #margaritawithastraw. What a beautiful movie, so sensitively made, touches a chord in you. LOVED it. #shonalibose Proud of you :)”

Actress Radhika Apte and Aditi Rao Hydari also commented on Twitter about how much they loved the film and urged everyone to watch the overwhelming film 'Margarita, With A Straw'.