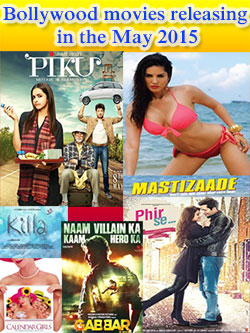 The month of May is going to be the moth of movies in which top 11 Hindi movies are scheduled to released. On the first May Calendar Girls movie is releasing which is directed by Madhur Bhandarkar and starts like Akanksha Puri, Kyra Dutt are in the lead role in the movie

Another Hindi film which is releasing is 'Gabbar is Back' and in this film Shruti Haasan, Jaideep Ahlawat and Kareena Kapoor Khan are the main stars.

You must be very eager to see the list of movies releasing in May 2015 in box offices. So, here is the list of all movies: The Calendar Girls is a Hindi movie which is director Madhur Bhandarkar and all set to release on 01 May 2015. The plot of the film revolves around the models who gain popularity due to the famous calendars. 'Gabbar is Back' is upcoming Hindi Movie which is directed by Krish and it is produced by Sanjay Leela Bhansali and Viacom 18 Motion Pictures. Film is starring Shruti Haasan, Jaideep Ahlawat and Kareena Kapoor Khan. This film is releasing on 1 May 2015. Hindi film Mastizaade is another film after the 'Ek Paheli Leela', which is directed by Milap Zaveri. The movie Mastizaade is releasing on 1 May 2015 in box offices in India. The Hindi movie Killa is all set to release on 8th May 2015 in box offices in India. 8. The Spectacular Jihad of Taz Rahim The Hindi Film 'Bombay Velvet' is a crime and dram film which is directed and co-produced by Anurag Kashyap. This movie is based on the historian Gyan Prakash's book Mumbai Fables. In the movie Ranbir Kapoor, Anushka Sharma and Karan Johar in lead roles. This movie is releasing in Hindi and directed by Anand L. Rai. Stars of the movie are: The movie 'Welcome Back' is Hindi movie which is directed by Anees Bazmee and produced by Firoz Nadiadwala & Co Producer F M Khan Swiss Entertainment Pvt Ltd. Casts of the more are Nana Patekar, Anil Kapoor and Paresh Rawal.