Big B and Irrfan Go Bananas On the Sets of 'Piku' 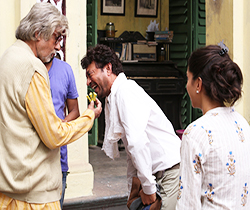 Mumbai, April 13, 2015: Shoojit Sircar's family comedy drama Piku that brings together Amitabh Bachchan, Deepika Padukone and Irrfan Khan has been in the news from get go- be it the overwhelming response to its trailer and its first song or scoops from the set that indicate that this film has been a fun ride for the actors!! In fact the camaraderie shared by the three stars was also visible in the recently released 'Making of the Piku Poster' video!

And now we have yet another crazy anecdote to share with you. Amitabh Bachchan who plays the father of Deepika Padukone (Piku), was supposed to give bananas to his co-actor Irrfan Khan in a scene and the actor was to take one banana and eat it. The scene had a funny banter between the two. However, there were 5-6 retakes because everyone kept cracking up thanks to the funny dialogues! In due course of so many retakes, the bunch of bananas also got over leading Big B to jokingly offer Irrfan just the left over banana stem!

This moment was caught on camera with Sr. Bachchan offering a Banana stem to a visibly gregarious Irrfan!! The end result: A laugh riot on the set!