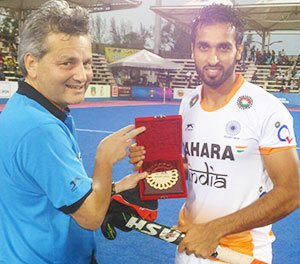 The match started with full force as both the teams locked their horns to finish third position. South Korea earned a penalty corner in the 9th minute, which was thwarted by one of the world's best goalkeeper PR Sreejesh, who anticipated the direction of the ball in mili-seconds. India soon counter-attacked on its opponent and this time midfielder SV Uthappa carried the ball speedily from the right flank and passed towards forward player Nikkin Thimmaiah, who was standing in front of the goal-box. Nikkin reflected the shot and send the ball into the nets to take the early lead of 1-0 in 10th minute.

In 2nd quarter saw a tough battle between two teams as South Korea came back strongly and kept on attacking on Indian defence. In the 20th minute, they managed to earn another penalty corner and this time they were determined to score a goal. PR Sreejesh again managed to prevent the shot but the rebound shot was received by Korea's Hyosik Cho who hit the ball hard into the goal-box. With this goal, South Korea managed to equalise the score-line 1-1. However, after two minutes, Indians counter-attacked again and this time forward player Satbir Singh carried the ball speedily from the left flank and gave a short pass to midfielder Dharamvir Singh, who returned the ball to Satbir. By this time, Satbir came in front of the goal-box and send the ball into goal-box. India displayed an excellent team-work and took the 2-1 lead. After receiving the jolt, South Korea attacked again and managed to earn three back-to-back penalty corners in 29th minute. India thwarted Korea's two attempts but Hyunwoo Nam converted the third attempt and equalise the score-card by 2-2 by the end of second quarter.

In the 3rd quarter, both the teams came on field with better strategies and gave a tough fight to each other. Both the teams tussled for the ball possession and continuously attacked on their opponent's half. But both the defence line-up played extra-ordinary and failed their opponent's attempts. After a hard battle, the quarter went goal-less. In the 4th quarter of the match also saw close-fought battles between the players from both sides. Both the teams gave their level best to score the winning goal but they lacked the finishing touch and the match went to penalty shoot-out.

For Sreejesh heroic performance, he was adjudged the Man-of-the-Match.