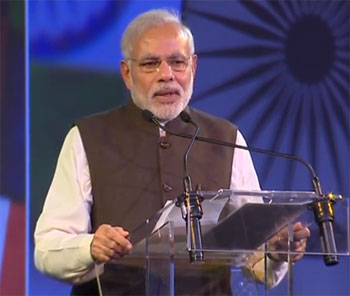 The Prime Minister, Shri Narendra Modi, on Saturday made a strong pitch for India's permanent membership at the United Nations Security Council, and expressed confidence that the world would soon recognize and accept India's capabilities. "Vishv Bharat ko jaanega bhi aur maanega bhi," the Prime Minister asserted, in remarks at the Community Reception at the Carrousel de Louvre in Paris.

The Prime Minister spoke of his engagements in France over the last two days, emphasizing his visit to the World War-1 memorial at Neuve Chapelle earlier in the day. He said he felt an immense pride at the memorial, which is a testament to the bravery of Indian soldiers who laid down their lives during the First World War.

The Prime Minister said that the world should recognize the spirit of sacrifice that is unique to India. He said these soldiers had sacrificed their lives, not defending their own country, but fighting shoulder to shoulder with the French. He said that by visiting the memorial, he wanted to send out a message that the world should change its perception about India - a country which can make sacrifices for others.

Shri Narendra Modi said India has never attacked other countries, and has contributed enormously to United Nations peacekeeping missions. Yet, India did not have a permanent seat in the United Nations Security Council. "Gone are the days when India used to beg," the Prime Minister said, asserting that India would now demand its right.

The Prime Minister said that as the land of Buddha and Gandhi, India had great moral authority, and expressed hope that the United Nations would consider this carefully on the 70th anniversary of its formation, this year.

The Prime Minister expressed happiness that his remarks were being beamed live, with French translation, in island territories in various parts of the world, including Reunion Island and Guadaloupe. He said 2.5 lakh people of Indian origin live on these islands too. He said there are many people of Indian origin in France, who now have little or no trace of their ancestral roots in India. He added that India still cared for them, because of their common DNA - irrespective of the colour of their passport.

The Prime Minister said he was confident, based on his experience of ten months of his Government, that the hopes and expectations of all Indians would be fulfilled. He spoke of some initiatives of the new Government, including the success of the Pradhan Mantri Jan Dhan Yojana, direct cash transfer of LPG subsidy, and coal block auctions. He said the "Make in India" initiative had aroused tremendous interest in France. He said that at the crux of all policies of his Government, was the vision to generate jobs for India's youth. He said India's demographic dividend was its biggest strength.