Daler Mehndi Celebrates Baisakhi with This His New Single - Khalsa 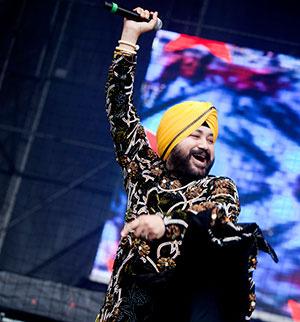 Mumbai, April 10, 2015: The king of pop Daler Mehndi has gifted his fans a new release titled 'Khalsa' in this month of April i.e. the month of Baisakhi. The spiritual track is his ode to God and is a result of his introspection of faith, humility and the world today. Organized by the Punjab Association, the Tunakster will be performing the song today on April 10, 2015, for the first time at Rabindra Natya Mandir, Mumbai and in Delhi on April 17, 2015.

The title 'Khalsa' is derived from the word given by Sant Kabir which means Khalas or Pure. The month of Baisakh is considered auspicious by the Sikh community and is one of their major festivals; it holds large religious significance as it was on a Baisakhi day that Guru Gobind Singh, the tenth Sikh Guru laid the foundation of Khalsa-the Order of the Pure Ones.

Speaking about this track, Daler Mehndi explained, "I wanted to create such a rhythm and such a sound which would compel one to feel that he/she is a part of God. I noticed, till the 1990's each home in India having 4 or more members would have a separate God/Deity that each one believed in. But now, every household has left these Gods/Deities and started following men/women who are brilliant lecturers and have started treating them as Gods. After a lot of introspection and motivated by the Guru's words – JO PRABH KO MILBO CHAHEY KHOJ SHABAD MEH LAE - whoever wants to meet God should look for HIM in the WORD of GOD. Khalsa is a product of that introspection and motivation.”

With 'Khalsa' the singer aims to bring to fruition a reminiscence of a philosophy long forgotten, Daler portrays his best as usual with this new number with which he hopes listeners would feel the same aura he did when he recorded the track.

You can hear the new track in the link below. BOLE SO NIHAAL SAT SRIAKAAL!

The link of the song: