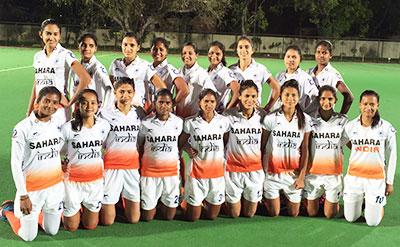 New Delhi, 31 March 2015: Hockey India today announced the Indian Women Hockey Squad for the upcoming Hawke's Bay Cup to be played in New Zealand from the 11th - 19th April 2015. The tournament will witness India, Argentina, Australia, China, Japan, Korea, USA and New Zealand battling it out to win the upcoming and all important tournament.

Playing their first match on 11th April 2015 against China, the Indian Women Hockey Team is all set and motivated for the upcoming challenge which awaits them in New Zealand. The team will yet again be led by Captain Ritu Rani who will be supported by Vice-Captain Deepika.

Training under Roelant Oltmans, Director, High Performance, Hockey India the team is aiming to win and claim the title as they understand that this will help them gear up for the all important Hockey World League Semi Final in Belgium.

Speaking on the team line-up, Captain, Ritu Rani said, "The team is high in confidence post our back to back wins in the World League Round 2 in New Delhi. We know the tournament will not be easy but the team is positive to fight it tough. We have worked hard on our attacks and penalty corner conversions and aim to stick to our strategies."

Speaking on the team, Roelant Oltmans, Director, High Performance, Hockey India said, "I have seen this team grow in confidence in the last one year and they are bettering themselves with each game. They will be clashing with the top teams in the tournament and they are looking forward to it. The aim is to stick to basics and not experiment much on the field while even following the strategies planned for the match."