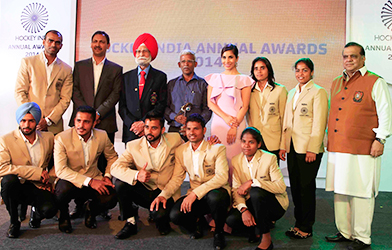 New Delhi, 28 March 2015: A landmark occasion was witnessed, as Hockey India today conferred the first ever Annual Awards to recognise the dedication and hard work of hockey players, coaches and administrators on the field to build the sport on the national and international arena. Awards of over Rs.2.80 Crore were presented in a glittering ceremony at New Delhi. The Chief Guest for the occasion was the Hon'ble Minister of Youth Affairs and Sports, Mr. Sarbananda Sonowal.

Awards worth over Rs.2.80cr conferred to players for their outstanding performance

Hockey India conferred the awards in the categories of Major Dhyan Chand Lifetime Achievement Award to Balbir Singh Sr. with a cash prize of Rs 30,00,000, the Dhruv Batra Award for Player of the Year (Men and Women) awarded to Birendra Lakra and Vandana Katariya taking home a cash award of Rs 25,00,000 each. Jaman Lal Sharma Award for Invaluable Contribution (for coaches and support staff)awarded to Harendra Singh wherein he got a cheque Rs 5,00,000 and Hockey India President Award for Outstanding Achievement conferred to One Thousand Hockey Legs with a Rs 5,00,000 cheque for its exceptional contribution towards the sport.

Speaking post the awards Balbir Singh Sr. said "I share the entire credit of the medals and trophies with my team mates and coaches. Dada Dhyan Chand was my role model. I attained inspiration from him and continue to do so till date. I am grateful for getting acknowledged so humbly. It is an honour to share this award today with all the sportsmen".

An excited PR Sreejesh talking on being chosen for the Baljit Singh Award for Goalkeeper of the Year said "It is an honour that I received the award from Baljit Singh and I have always looked upto him. I am very happy and I think I deserved it".

An elated Namita Toppo said "I am happy and I was not expecting this today. This gives me motivation to play better and continue to improve my performance in the future. For now I am focusing on the New Zealand tour".

A very happy Birendra Lakra said "I was hoping that I would get an award today and I am so happy to have been chosen for the Dhruv Batra Award for Player of the Year. This initiative by Hockey India is an inspiration for all the players and this will motivate us to work hard and play better each day."

Happy with the award Vandana Kataria said "It feels great to have won the award today. Will aim to play better and make my country proud".

Congratulating the awardees, Dr. Narinder Dhruv Batra, President, Hockey India said, "This is a first of its kind initiative and we will continue recognising players for their performance on the field. We want to motivate them and make them feel proud for what they are achieving for the country. I congratulate each of the awardees and hope to see them continuing to contribute for the sport for times to come."

List of Awards for the 'Hockey India Annual Awards' -

The awardees for the 'Hockey India Annual Awards' received a glittering trophy, certificate and cash award.