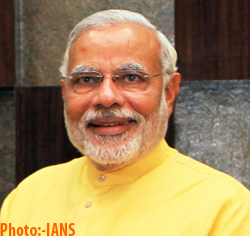 Keeping aside all the speculations of opposition and its rumours, Prime Minister Narendra Modi said that his government was only removing the 'shortcomings' in the existing legislation so that 'our farmers don't suffer'. He said that the present'bill is aimed at the welfare of farmers and villages.

He was addressing farmers in his monthly radio address 'Mann Ki Baat'.

During his address, Modi said that the Land Acquisition Act, 2013, was passed in a hurry. We too supported the government then but soon realised that it was not in the interest of the farmers and decided to remove its shortcomings.

He further said that the 2013 act had kept out of its purview 13 laws including those related to railways, highways and mines. These accounted for most of the land acquisition. He blamed that there are rumours against it were meant to keep the farmers poor and backward.

Further adding his commitment for his government, he said that it had to bring in an ordinance so that farmers get the right compensation for the land acquired. When the 2013 act was enacted, many MPs from the previous United Progressive Alliance government opposed it, saying it was anti-farmer and would only help bureaucrats and officers.

Modi assured the farmers during his address that the highlights of the old legislation had been preserved in the new bill including providing job to a young member of the family whose land has been taken away.

Prime Minister stated that it was wrong to think that land acquired in the villages would be used for private businesses.

OTHER TOP STORIES
Dynamics 365 Field Service (on-premises) retiring on June 30, 2022
Microsoft allowed Teams customers access Dynamics 365 data in Teams chat
Narappa Movie to be released on Amazon Prime on July 26th and 27th
Samsung Galaxy M42 5G: Full features and specification - Low cost 5G phone from Samsung, Check price and specification
What is Mucormycosis and how it is treated?
216 crore doses of vaccines to be manufactured in India between August-December: Center Government