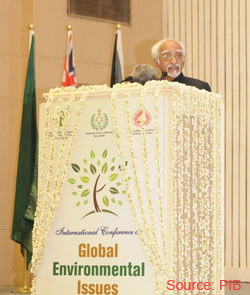 NEW DELHI, March 14, 2015. The development aspirations of the developing countries should be built into the green economy principles being evolved at the international level. Whatever the  respective national positions on these issues, the protection and preservation of environment is the common responsibility of all humanity. This calls for closer cooperation among nations and a holistic approach. Failure to do so would have serious consequences for human survival.

This was stated Mr. Mohammad Hamid Ansari, Vice President of India, while delivering the inaugural address at the International Conference on ‘Global Environment Issues’, organized by the National Green Tribunal in association with the Ministry of Environment, Forest and Climate Change, Indian Law Institute and FICCI.

Mr. Ansari said, “Globally, India’s policy goal of achieving sustainable development and addressing emerging global environmental concerns, such as, climate change, ozone depletion and bio-diversity loss, is guided by the principle of ‘common but differentiated responsibility’. India prefers an ‘aspirational’ rather than a mandatory or ‘prescriptive’ approach. “We believe that the issue of sustainable development should be approached with a sense of equity”, he added.

He said that environment is a public good. It is not owned by any one individual. Human activities result in significant environmental changes that cause damage to species, ecosystems and ecological processes. Preservation of the integrity of these ecological components is critical, considering they provide the bio-physical base necessary for human life, such as water, land, air, forests, biodiversity.

The Vice President opined that sustainability of economic development crucially hinges on the protection of environment. “For us in India, challenges of arresting the pace of degradation of environment are formidable due to the imperatives of maintaining high economic growth, increasing trends of urbanisation, population growth, industrialisation, unmet basic needs, life style changes and biotic pressures. Therefore the need was to pay greater attention to management of all natural resources through appropriate eco-friendly policies, regulatory frameworks, pricing of natural resources and making pollution costlier for the polluter,” he said.

Mr. Mohammad Ansari said that in India, protecting and improving the natural environment is a fundamental duty of every citizen as per the Constitution. Domestic policies have been tailored to take into account the environmental impact assessments. Institutions to implement and monitor these policies have been set up at the Centre and state level. India has also been active in international forums relating to environmental protection, and is party to 94 multilaterals environmental agreements. However, much more needs to be done to translate commitments into action and results.

On the occasion, the Vice President released the International Journal of the National Green Tribunal.

Mr. Justice H L Dattu, Chief Justice of India, said that the international community was united on the issue of protection and prevention of environment. The world over people face many environmental issues such as global warming, disposal of nuclear waste and so on. However, various regions have arrays of issues that are specific to their zone. Hence, the need was to   adopt and adapt new efficient and clean technologies to reduce the harmful impact of hazardous industry waste and emission of dangerous radiation.

He said that every citizen has a right to live with dignity and the judiciary in India was forging its way ahead to provide this fundamental right to all its citizens.  Therefore, the need was to address environmental issues prudently and urgently.

Mr. Justice Dattu cited many instances where the Indian judiciary took up a proactive role and passed judgments to protect and preserve the environment from human interferences. He also emphasized on the importance of rehabilitating and re-location of people who were displayed owing to these decisions.

Mr. Prakash Javedekar, Union Minister of State (Independent Charge) for Environment, Forest and Climate Change, said that the government has proposed to launch a campaign ‘Fresh Air is a Birthright’ in PPP mode as there were serious concerns over worsening air pollution in the capital and other cities across the country.

He said that the international conference had brought together the three pillars of Indian democracy - executive, judiciary and legislature - under one roof. The three bodies should work in tandem and respect the aspirations of India’s poor and work towards achieving a sustainable development model.

Enumerating some of the environmental challenges Mr. Mukul Rohatgi, Attorney General for India, said that global warming, electrical & nuclear waste, ozone layer depletion, extreme change in weather temperatures and public health issues such as respiratory diseases were some of the issues that demanded immediate attention of the stakeholders.

Highlighting the role of judiciary in protection and prevention of environment, he said that the role of Supreme Court of India has been exemplary. Quoting the instance of Delhi, Mr. Rohatgi said that the Supreme Court was able to anticipate the need of removing heavy industries from the populated areas of Delhi and also directed the public transport in the city to use natural gases as its fuel, which resulted in improving air quality of the city. However, these were temporary solutions and there was a need for permanent and sustainable response to environmental issues.

Mr. Rohatgi was of the view that re-habilitation, re-construction and re-location must also be considered for the people, employees and other affected individuals while displacing or closing a polluting industry or directing them to change their technology or processes.

Mr. Justice Swatanter Kumar, Chairperson, National Green Tribunal, said that the international conference would provide a platform to all the stakeholders and the beneficiaries of global society to discuss and analyze specific questions relating to the environment and its management. The focus would be to collectively bring such solutions to the persistent environmental issues, which would support an all inclusive growth that sustains not just the environment, but even the human life and livelihoods.

Mr. Justice Kumar stated that climate change, global warming and natural disasters are a wake-up call to humanity that they should stop polluting the earth and the need of the hour is to strive a symbiotic relationship with the environment through sensitive and researched environmental management, adaptation, mitigation and risk reduction.

Mr. Ashok Lavasa, Secretary, Ministry of Environment, Forest and Climate Change, said that the year 2015 is significant across the globe with respect to environment as the UN’s Sustainable Development Goals and the International Climate Change Agreement are due to be finalized by the end of this year. Hence, the ongoing international conference on climate change offers a unique opportunity and platform to stakeholders to deliberate on various environmental challenges and achieve a balanced course of action.