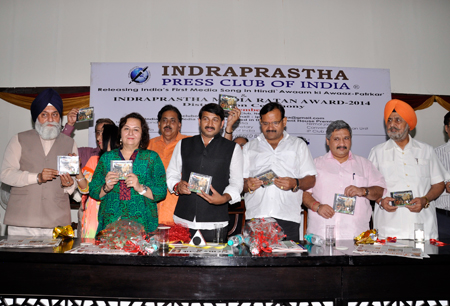 Samrat Shri Manoj Tiwari. On the occasion Shri Manoj Tiwari assai that he will sing the media song in Bhojpuri. Singing the song on the contributions of media will be matter of pride for him.

The role of Public Relation Officers is very large in media. "Public Relation is a deliberate, planned and sustained effort to establish and maintain mutual understanding between an organization and its public." A public relations officer (PRO), also known as 'Media Specialist,' is the spokesperson of an organization. His or her role is to convey the policies and interests of the organization to the public through various modes of media. The need for a PRO can be found in almost all sectors, including private companies, advertising agencies, financial organizations, government agencies, charities, etc. As a PRO has to be dedicated 24/7 to protect the interest of a organization. A seasoned PRO does not only manage and maintain reputation, but also continuously work towards creating and ameliorating the goodwill of the organization.

Public Relations have always been about people foremost. While ongoing technological developments affect Public Relations as an institution, the industry’s key purposes remain the same. PR is still firstly about story, telling but digital advances have changed the way in which they are told, who tells them, the channels used, and the amount of control organizations have over the story.

PR professionals no longer pitch just journalists, bloggers and influential Twitter and LinkedIn users have been added to media lists. Journalist follow ‘friend’. Communications or PR pros on Twitter, Linked or Facebook and use social media to look for press releases. However these press releases must contain newsworthy content and ideally contain a short summary when posted. Public Relations professionals have always known how to tell a good story and now this role is focused how to get the most mileage out of the content. Content needs to be adapted to each platform and audience in order to reach the greatest numbers and pull people in effectively. The digital age has led to more re-purposing of content than ever before.

IPPCI made a pioneering effort by making the first international media song ‘Proud to be Journalist’ which was released internationally in 2013, the entry for the song was also send to Guinness Book of World records. The Hindi version of the song ‘Awam Ki Awaaz, Patrakar’ was released on the occasion to highlight the contributions of Indian media. The song is dedicated to the contributions of media community in nation and society building. Media is the fourth pillar of the society and its contribution can be seen in every walk of life. This song is a tribute to the media community by IPPCI. Caller tune of the song can downloaded free for BSNL and MTNL users. The music of the song is composed by music director Mr. Taru Bhalla and the singer of the song are Sankalp Bhalla and Charvi Virmani.  It is noteworthy that in 2013 IPPCI honored 35 women journalist with Indraprastha Media Ratan Award highlighting their contribution in the media.