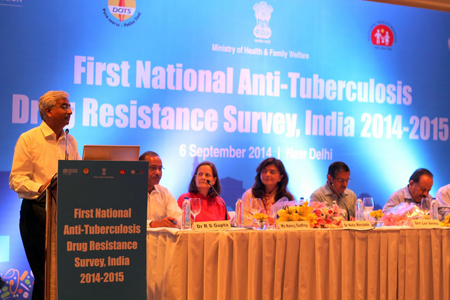 More about this first-ever national survey

This national anti-TB drug resistance survey will involve 5214 patients all over the country through 120 TB units. Out of the total 5214 patients, 3233 will be new cases of presumptive MDR-TB and 1991 will be retreatment cases found presumptive for MDR-TB. The survey entails 12,000 liquid cultures, 70,000 tests, establishing 6 new MGIT 960 liquid culture machines, training 600 master trainers and thousands of other staff. Genetic sequencing of isolates to identify associated drug-resistant TB mutations and real-time monitoring system using information communication technology (ICT) are other salient features of this survey.

Survey results will be used in estimating drug resistance; establishing a surveillance system; designing better regimens based on resistance patterns; genetic sequencing data on common mutations can be used to develop indigenous molecular diagnostics and new drugs; apart from providing other benefits.

Anshu Prakash emphasized that survey results from India will have implications on TB responses not just for our country but also for the entire world as India has highest absolute numbers of MDR-TB and TB patients too.

Another major step forward with this survey is that patients diagnosed with drug resistant TB will get treatment as per the report of drug susceptibility testing (DST) done on 13 anti-TB drugs. Dr Jagdish Prasad, Director General of Health Services, Ministry of Health and Family Welfare, Government of India, informed that DST guided proposed regimens are available now after a national consultation of experts.

Why this survey is important?

Dr Sachdeva said that with 15 odd anti-TB drugs in the Indian market and a large number of patients showing mono- and poly-resistance to anti-TB drugs other than Isoniazid and Rifampicin, there is an urgent need for this type of survey. Currently RNTCP is not addressing resistance patterns other than MDR-TB and XDR-TB and treatment was being provided to those with confirmed MDR-TB and XDR-TB only (instead of DST guided treatment for all). Perhaps outcomes of this national survey will inform the programme to respond adequately to these challenges.

He also stressed upon the need to address DST for new patients so that new cases of MDR-TB can be diagnosed early and offered suitable treatment based upon the DST results.

India ranks number one accounting for 20% of the TB burden and 25% of the MDR-TB burden at the global level. The mortality associated with MDR-TB is also much higher than drug susceptible TB. With death rates among MDR-TB patients treated under RNTCP in India being 20% as compared to global rate of 14%, the threat of emerging MDR-TB is looming large and needs a multipronged strategy to prevent further spread of MDR-TB. As of now India is able to detect and treat only 40% of the estimated cases of MDR-TB from 122 drug-resistant TB centres across the country. Till June 2014, 447,670 patients presumed to have drug resistance got tested, 53,883 patients received treatment for MDR-TB and 1021 patients received treatment for XDR-TB from RNTCP.

'Close the tap': Do not forget prevention!

Dr Nata Menabde from WHO India said that apart from better diagnostics and treatment regimens, prevention is a critical aspect in reducing MDR-TB burden. Lov Verma, Health Secretary, Ministry of Health and Family Welfare, Government of India, agreed with Menabde that prevention must not be neglected. He said that MDR-TB rates in new TB cases are very alarming and even infants are getting infected with MDR-TB.

CK Mishra, Additional Secretary and Mission Director, National Health Mission, Ministry of Health and Family Welfare, Government of India said that by 2017, rapid molecular tests will be made available in every district of the country.

All TB patients should be within our reach

Mishra underlined the need to have the entire cohort of patients within our reach; else monitoring the TB response would always remain a challenge. Acknowledging that the public sector has done a commendable job in TB control, he said that a lot more has to happen. For example, engaging private sector is easier said than done and we need innovative strategies to collaborate effectively in order to ensure that every TB patient receives standard accurate diagnosis, quality and effective treatment and care – in public sector as well as private sector.

Ending irrational drug use is a priority

Emphasizing that one of the major causes of drug resistance is that patients get incorrect treatment, Mr Love Verma, Secretary Health, Ministry of Health and Family Welfare, Government of India called for strengthening government’s engagement with private doctors in the fight against TB.

Dr Jagdish Prasad, Director General of Health Services, Ministry of Health and Family Welfare, Government of India insisted upon ending irrational use of antibiotics. “We must ensure by all means that the drugs we have are used rationally and no further drug resistance occurs.”

Lov Verma, Health Secretary, Ministry of Health and Family Welfare, Government of India said that once the survey results come in, we have to be ready to ensure that results feed in our programme without delay to effectively control TB and anti-TB drug resistance.

Dr Harsh Vardhan, Union Minister for Health and Family Welfare, Government of India said that, “No patient in this country should be deprived of the availability of the anti-TB drugs which can treat him/her. This survey should prove to be a stepping-stone and help us to find strategies that will work to ensure timeliness in achieving our goal. We have a strong political commitment to control TB.”

The launch of this first-ever nationwide anti-TB drug resistance survey is indeed a milestone, and can potentially be a stepping- stone if survey results shape the TB response optimally.