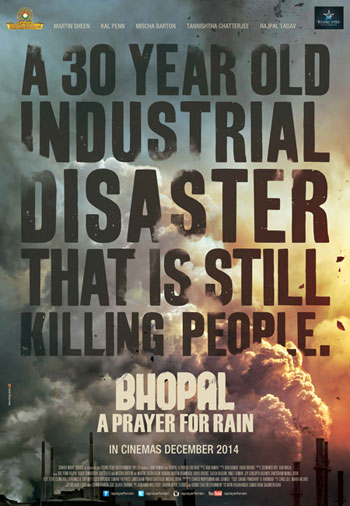 The first poster of the film 'Bhopal A Prayer For Rain' is released. This film is based on the Bhopal Gas tragedy.

The makers of 'Bhopal A Prayer For Rain', Sahara Movie Studios and Rising Star Entertainment have released an attention-grabbing first poster of the film. With smoke-spewing chimneys in the background, the poster reads "A 30 year old industrial disaster that is still killing people." The poster sends out a strong message: the tragedy has happened, it has brutalized the lives of thousands of people and is still taking lives.

It portrays the seriousness of the issue, making it impossible to belittle. Hollywood legend Martin Sheen is joined by Mischa Barton and Kal Penn alongside Indian actors Tannishtha Chatterjee and Rajpal Yadav in 'Bhopal A Prayer For Rain' which is set to release worldwide on December 5, 2014.

This film will be released in English in India and United Kingdom.