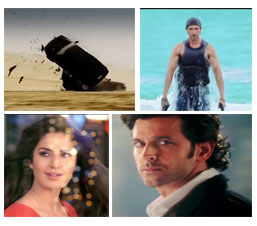 The 'BANG BANG' Movie is upcoming Bollywood Hindi movie which is releasing on 02 October 2014. The trailer of the 'BANG BANG' movie is already hit and it gets 13 millions hits till now. This movie is featuring Hrithik Roshan and Katrina Kaif in the lead role.

The 'BANG BANG' Movie will be released in Hindi and its budget is Rs. 80 to 90 crores. This trailer of the BANG BANG' Movie is featuring the actions of the Hrithik Roshan and Katrina Kaif. The film will be also dubbed into Tamil and Telugu and then relased on the same day all over the India in box office.

Bang Bang! is an upcoming thriller action film in Hindi and it is directed by Siddharth Anand. Movie produced by the Fox Star Studios.

The 'BANG BANG' movie is an official remake of the Hollywood film Knight and Day.

The Fox Star Studios will distribute and market the film worldwide.

The casts of the film are:

Here is the official Trailer of the film  'BANG BANG':