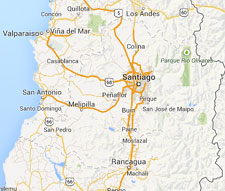 Normal life in Chile come to a halt when it witnesses a magnitude-8.0 earthquake to its cost which has been assume for a warnings of Tsunami for all of Latin America's Pacific coast. The US Geological Survey (USGS) has said that it can be a warning for Tsunami for the region. However there was no immediate report of any damage.

According to the USGS, the quake, centred 86km (56 miles) north-west of the mining area of Iquique, is very shallow, only 10km below the seabed, which would have made it feel stronger, BBC reported citing the USGS.

Needless to say, the South American country of Chile is one of the most seismically active countries in the world. The nation is a long, narrow strip of land between the Andes mountains to the east and the Pacific Ocean to the west.

Chile borders Peru to the north, Bolivia to the northeast, Argentina to the east, and the Drake Passage in the far south.Meanwhile, Chilean authorities used television to order the evacuation of coastal areas, urging citizens to escape speedily.

Meanwhile the Pacific Tsunami Warning Centre, which said the coasts of Peru, Ecuador, Colombia, Panama, Costa Rica and Nicaragua were all at risk of a tsunam, warned of waves of up to 1.92m (6.3 feet) could have struck near the town of Pisagua, Chile, within 44 minutes of the quake. The USGS said a quake of this force had the power to generate a "destructive tsunami" for coastlines. Chilean authorities, however, reportedly registered the quake as 7.9 magnitude.

In 2010, central and southern areas of Chile had been hit by a powerful earthquake of 8.8 magnitude, followed by a tsunami that devastated scores of towns in February 2010.