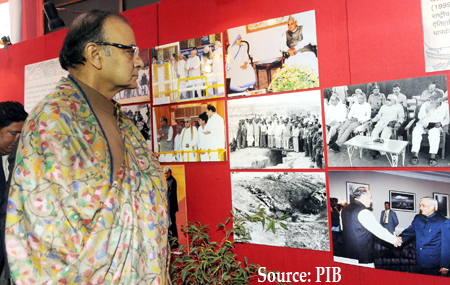 Union Minister of Finance, Corporate Affairs, and Information & Broadcasting Shri Arun Jaitley has said, the Multimedia Exhibition mounted by DAVP on the former Prime Minister Shri Atal Bihari Vajpayee would serve as an inspiration and learning to the people in understanding the life and contributions of Shri Vajpayee as a politician, statesman, and poet. Shri Jaitley stated this while inaugurating the Multimedia Exhibition being organized on the occasion of the 90th birthday of former Prime Minister at IGNCA complex here today.

The exhibition will portray the life of Shri Vajpayee Ji, through a display of around 250 photographs which reflect his vibrant personality. These rare pictures not only take the visitors through the political journey of this visionary leader, but also provide a glimpse into the diverse phases of his life - as a poet and a great thinker. At this event, different facets of Vajpayee Ji's life will be showcased through photo and electronic exhibition. Scrollers, Translites, LED walls, Large Fascia and Title Boards will be the major attractions of the exhibition.

Apart from this, a drawing and quiz competition will also be organized on the occasion. The Film Division of the Ministry will screen three films based on the life of the former Prime Minister Shri Atal Bihari Vajpayee. Photo Division has provided the photos being mounted at the Exhibition. The Song and Drama Division of the Ministry of Information & Broadcasting will be giving cultural performances during the Exhibition. Publication Division has organized a Book Exhibition at the venue. Doordarshan has provided short-films to highlight the achievements of the former Prime Minister Shri Vajpayee. Minister of State for Information & Broadcasting, Col. R.S Rathore, Shri Bimal Julka, Secretary, I&B and other senior officials of the Ministry were also present on the occasion.