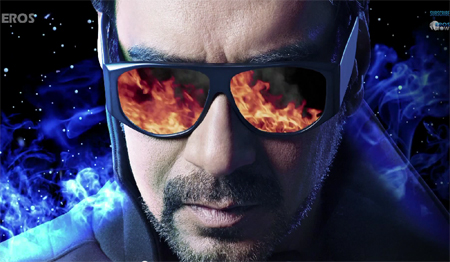 The official post video of the upcoming Bollywood movie 'Action Jackson' is released on the YouTube featuring the Ajay Devgan. This movie is all set to release on 15th December 2014.

This movie is directed by Prabhu Deva and is being produced at A Baba Films production. This movie is distributed by the Eros International. See the stars like Ajay Devgn, Sonakshi Sinha, Yami Gautam & Manasvi Mamgai in new and never before look.

The current poster video of the Movie is featuring Ajay Devgan using high animation graphics. The graphics animation is of very high quality and really a nice work of the graphics designer(s).

The 'Action Jackson' is the upcoming movie which is scheduled to be released on 05 December, 2014. In this film Ajay Devgn is in the title role. Other leads of the film are Sonakshi Sinha, Yami Gautam and Manasvi Mamgai.

The director of this movie is  Prabhudeva and the film is produced by Gordhan Tanwani and Sunil Lulla. The  'Action Jackson' is among the most awaited movie and expected to be released on 05 December 2014.

You must aware about the fact that this movie a remake of Telugu movie Dookudu.

Casts of the movie 'Action Jackson'

This movie is a work of Baba Films production & Eros International. Movie is directed by the famous film director Prabhu Dheva. This film  'Action Jackson' is produced by Gordhan P Tanwani & Sunil Lulla.

Don't forgot to check the last trailer of the Action Jackson Trailer movie.