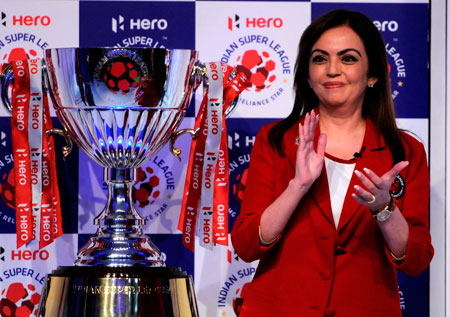 Hero Indian Super League unveils the Pride of Indian Football in Mumbai Today. Mrs Nita Ambani said that its momentous day for all of us.

The meticulously detailed and chiselled to perfection, Hero Indian Super League trophy is a labour of love, a celebratory symbol of grand triumph which will add crowning glory to the spectacle of Indian Football.

Speaking on the occasion, Mrs Nita Ambani said, “It’s a momentous day for all of us today as I stand along with the world’s footballing legends to unveil the pride of Indian Super League. As these role models have inspired hundreds of thousands of players worldwide, I am sure the ISL trophy will also stand as a symbol of aspiration for many youngsters in an emergent India.

“The Indian Super League trophy is detailed to perfection by Indian artisans who were trained in London, thus exemplifying the genius of Indian artistry and world-class craftsmanship. Its ‘made in India’ design embodies our love and passion for this beautiful game and it equally represents our ‘made for world’ aspirations.”

Mr. Sanjay Gupta, COO, Star India, further added, “The Hero Indian Super League is a marquee football tournament wherein accomplished footballers, who have excelled on the international stage along with best-of-the-best of Indian football, will get to compete for the ultimate honour and it is only befitting that they compete for one of the most exquisite trophies ever crafted. With Hero Indian Super League well placed to fuel the birth of a footballing nation, I am confident that this will become one of the most coveted trophies in Indian football in the years ahead.”

Designed by Frazer And Haws, the Hero Indian Super League trophy stands 26 inches tall. The logo on the top band has the ISL colours assigned to it and the handles are ornately carved and embellished with 24k gold gilt to imbue a sense of pride when held up