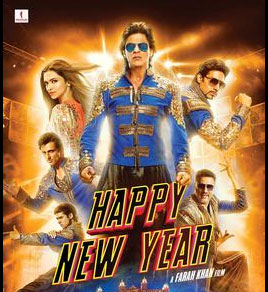 The Movie 'Happy New Year' was released on the box offices in India. This movie is release in Hindi and directed by Farah Khan. Movie is produced by Gauri Khan.

This movie is revolves around the story of  six Indians aspire. They are working hard to win an international dance competition and along with wining this competition their plan is to steal prized diamonds from a high-security vault in Dubai. But these guys cannot reach the height of a vault wall screw.

This movie is typical action and comedy movie.

Cast of the Movie: