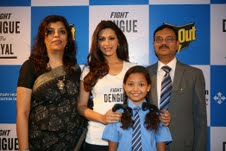 The 'Fight Dengue For Payal' campaign launches against this background. It is important, it is timely and it is urgently needed. Between September and November 2013, the program partners plan to implement the initiative in Delhi, Chennai, Hyderabad and Kolkata.

The main activities of the program are creating awareness drives at Resident Welfare Associations (RWAs) to educate families about dengue and its prevention.

School contact programs that involve reaching out to children so that they understand the dangers of mosquito borne diseases like dengue and adopt preventive measures Workshops and sessions with health experts to provide medical advice on the prevention and treatment of dengue.

The “hero” of the program is 12-year-old Payal Samariya from Jaipur. This young child saw her friend suffering from dengue, a painful experience that has inspired her to be part of this campaign. She has committed her time and energy to be part of this program and to help spread the prevention messages to as many people as possible. Innately compassionate, she wants to be a doctor when she grows up so that she can help those who suffer from such diseases.

Acclaimed Bollywood actor Sonali Bendre Behl, who has an eight year old son herself, is concerned about the well-being of Indian families. Supporting the campaign she said, “As a mother, I do not want children like Payal to suffer from diseases like dengue,” said Sonali Bendre Behl.

“Dengue can happen to anyone at any age, it’s us who have to take preventive measures to fight this disease. ‘Fight Dengue For Payal’ is a great initiative by ALLOUTfrom SC Johnson and VHAI to help people combat dengue. Let us all come together with Payal to fight against mosquito-borne diseases and help protect our families.”

Dengue is a mosquito-borne viral disease and is transmitted to people by the virus-infected Aedes mosquito. Monsoons and post-monsoons have higher rates of mosquito activity, turning sitting water, including puddles near roads and trenches, into breeding grounds. During this season, the incidence of dengue increases, making it even more critical to take the necessary steps to prevent it from reaching epidemic proportions.