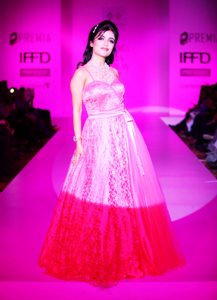 Premia India Runway week started with a grand opening at the Mapple Exotica Chattarpur, which witnessed a huge amount of footfall at the show make it a grand success in its very first edition.

Ace designer Rajdeep Ranaut started the show with his vibrant collection followed by Raas by Akanksha and Dhruv Arora in their debut show with the theme "Mutation". Mutation was showcased with a concept of displaying the change in fashion through decades of modernization and liberation, a gradual shift from traditional to contemporary. Raas also introduced its exclusive Pant Saree concept on the Ramp of Premia India Runway week, the first garment also showed a lehenga with a motive of Krishna with Flute and to blend with the idea the choreography of music was chosen accordingly with the soundtrack "flute fantasy" where as the third designer Swati Modo- Footwear showcased high heels footwear with stylish look and attractive colors to go with all kinds of garments. In addition to that, the essence of fashion was further invigorated by Swati Modo's shoe collection, which was inspired by Lady Gaga.

Later, Rosy Ahluwalia with AKS jewels presented the marvelous collection followed by Studio Dream collection by Sandeep and Anju Chanana. But the cynosure of the event was Sagar Mehra and Diamond Constellation by Punam and Preeti Kharkia, Sagar Mehra's collection for which the showstopper singer Shibani Kashyap sizzled the ramp.

PIRW AW 13 is a new platform that showcases tomorrow's designers today. It is an initiative of The Indian Federation for Fashion Development (IFFD) to discover new talent and aims to provide a platform to them, giving them a chance to enter the fashion industry and present themselves to a great audience, says the young organizers Avinash Pathania & Kiran Kheva.