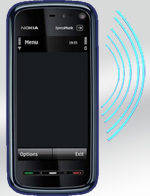 Taking a major step in the favour of public health, the government has directed the telecom players to follow the new guidelines of radiation, which has come into effect from September 01, 2012 (Saturday).

According to new guidelines, as of now, the EMF (Electromagnetic Frequency) exposure limit (Base Station Emissions) has been lowered to 1/10th of the existing International Commission on Non-Ionizing Radiation Protection (ICNIRP) exposure level. It means mobile towers will emit 1/10 times of EMF from Saturday as against earlier.

The higher EMF can cause several deadly diseases like cancer, mutation in human and animals. Viewing the growing network of mobile towers, telecom players and mobile users, the Department of Telecom, Minister of Information and Broadcasting has decided to revise the radiation guidelines.

Besides, mobile towers, now even handsets with higher energy absorption rate can continue to be in use until August 31 of next year. Government has ordered to mobile manufacturing companies to follow the new standard level of Specific Absorption Rate (SAR) which has been set at 1.6 watt per kg.

'Mobile manufacturers will also have to display the SAR value on the handset and inform the consumer while selling,' ordered DoT.

DoT has also stated that in case of violation of this norm, a penalty of 5 lakh will be levied per BTS per service provider.

Telecom Enforcement Research & Monitoring cells will be responsible for conducting audit on the self-certification furnished by the service providers.

The following are the highlights of the Standards:

Department of Telecommunication has released Guidelines covering BTS Towers so that some consistency gets evolved on setting up of BTS towers. Guidelines have been placed on DoT website.

Guidelines for consumers on Mobile handset usage have been issued and hosted on DoT Web site (http://www.gov.dot.in) for general public awareness. Some of them are: keep distance - hold the cell phone away from body to the extent possible, use a headset (wired or Bluetooth) to keep the handset away from your head, do not press the phone handset against your head. Radio Frequency (RF) energy is inversely proportional to the square of the distance from the source-being very close increases energy absorption much more, limit the length of mobile calls, use text as compared to voice wherever possible, put the cell phone on speaker mode, when your phone is on, don't carry it in chest/breast or pants pocket, when a mobile phone is on, it automatically transmits at high power every one or two minutes to check (poll) the network. . A booklet addressing possible queries from mobile telecom users on radiation-related issues along with other informative inputs is also being placed on DoT website.

TEC has revised the Test Procedure for measurement of EMF elaborating the methodology, calculations, measurements and report formats for verification of EMF compliance for BTS towers in accordance with new standards effective from 1st Sept. 2012. This will be applicable for all Mobile Service Providers and Term Cell Units to verify compliance.

Department of Telecommunications, Ministry of Communications and IT has ensured that the new EMF Radiation standards get implemented through close co-ordination with the industry. The guidelines underline the Government's efforts at providing the best possible Telecom services across the country without compromising on public safety and human health.