Meryl Streep is luckier than me, says Hema Malini 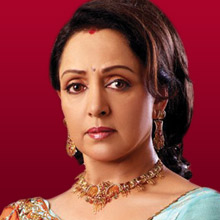 Noted Bollywood actress Hema Malini, who is better identified for making bold choices in her personal and professional life, is a great admirer of Meryl Streep.

The actress who has ruled the Bollywood in the '70s and '80s, believes that she's not as lucky as Meryl Streep, the Hollywood actress.

"I consider myself lucky, but she's luckier than me. I watch all her films and I feel, 'why can't they make films like these in Bollywood?' But I suppose, they have to Indianise a lot, such films may not work in Bollywood," Gulf News quoted 63 year old actress, who was referring particularly to the iconic, illicit romance The Bridges Of Madison County, as saying.

"Those ideas are too Western. I'd love to do a Bridges of Madison County. But opposite me also, there should be a big hero - bigger than me. Except Bachchan there's nobody else. I wish many other out there like Jitendra, Rajesh Khanna - all would be out. Where are they?" Malini said.