Release of 'Ishaqzaade' advances to May 11 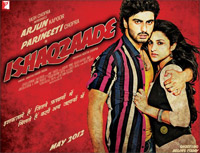 The second Friday of May will see a clash of movies as the release date of "Ishaqzaade" has been advanced from May 18 to May 11. The film stars Parineeti Chopra and newcomer Arjun Kapoor. With the advance in date the film is set to have a clash with "Dangerous Ishq"that is a comeback movie for Karisma Kapoor.

The production house Yash Raj Films (YRF) made this decision to release this romance drama a week earlier after thinking a lot.

"With 'Ferrari ki Sawaari' moving to a later date and the IPL (Indian Premier League) crunch matches starting from May 18, this shift will give 'Ishaqzaade' a better window for release," a statement issued from YRF said.

The movie is a narrative of two fiery characters and their fight for power and authority.

The film is Written and directed by Habib Faisal who has given films like "Do Dooni Chaar" , the film tells the tale of two people who are born to hate, and destined to love, and how they face each other.