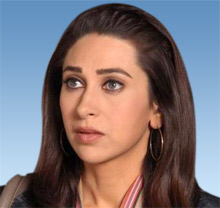 Actress Karisma Kapoor, who had not taken film assignments after marriage, says it is good to work if you prioritize the things right.

"I have taken a lot of break in the middle, which I really enjoyed. Taking care of kids and family was very important to me. That will always be my first priority," said 37 year old who is making a comeback after nine years.

"Now my daughter is older and she has started going to school, so I get time. If you work in moderation and prioritize, it's good to work and be active," the Filmfare and National Award winner told reporters at the launch of McDonalds Spongebob Happy Meal.

Known for her various successful films like "Raja Hindustani" and "Dil To Pagal Hai" she quit Bollywood after marrying Delhi-based businessman Sanjay Kapur in 2003. The couple has two children - daughter Samaira and son Kiaan. She is returning to films with Vikram Bhatt's 3D film "Dangerous Ishq".

While talking about her younger sister Kareena's comment that their grandfather Raj Kapoor was biased towards her, she said: "I think she means it in a nice way. I was the first grandchild and then I had my grandfather's eyes.

"I think there was a little gap and then Kareena, Ranbir and Riddhima came in quick succession. So, I was the special one for a while."

Karisma will be doing the role of a supermodel in "Dangerous Ishq", where model-turned-actor Rajneesh Duggal is doing the male lead. The film is scheduled to be released in May.