BMI may understand the epidemic of obesity 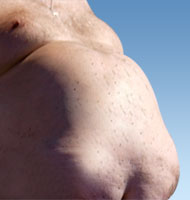 According to a recent study in US, Body-mass index BMI, widely used across the globe by the medical experts, health insurers and the fitness industry for more than 200 years may be classifying almost half of women and just over 20 per cent of men as healthy as their body-fat composition suggests they are obese.

The study used a patient's ratio of fat to lean muscle mass as the "gold standard" to detect obesity and the results suggested that it can guide an individual for the risk of health problems.

The body fat can better predict the health risks of an individual than the BMI, suggested the researchers in a report to LA Times.

The American Society of Bariatric Physicians used as costly diagnostic test called dual-energy X-ray absorptiometry, or DXA was used to measure the fatness and the subject level of obesity was calculated that was based on fat-composition standards.

The results of the study also suggested that, for men BMI is a poor measure of fatness in but not every time. Moreover, it was observed that 20 percent of the total men tested who were healthier and normal were found obese when tested with the new measure.

But the observation was more frequent in case of women. However, men who were found obese by the BMI standard were reclassified as normal and healthy when measured with the DXA.

"We may be much further behind than we thought" in addressing the nation's crisis of obesity, the researchers wrote.

In an interview, Braverman taunted BMI as "the baloney mass index" and said the widespread use of this technique as "feeding the failure" of public health policies and treatments with an objective to fight obesity. The 1,393 patients participated in the study were from his Manhattan practice.

The practices applied for shedding the extra pound form the body of the patient can result in weight loss for a short period of time and they will regain the weight again in long term, said, Braverman.

The medical interferences will prove more effective if it focuses to encourage the patients to work on their body composition towards lean muscle mass with the help of more exercise, more sleep and healthier eating instead of focusing on weight, he added.

The details of the study were published Monday in the journal PLoS One.