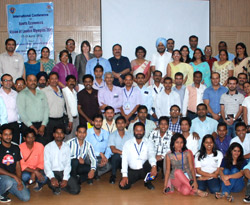 Delhi University Sports Council organized an International Conference on sports Economics and Vision of London Olypmic 2012 in DU. The conference was attended by physical educationist, economist, sports professionals and academicians. Personalities from more than 20 states and 5 countries attended the conference.

Economist like Prof Suresh Agarwal, Neera Verma, Jawinder Singh were also increase the input regarding the concerned issues. The conference was programmed with two panel discussions on various topics including sports and economics and London Olympic.

On the occasion personalities expresses their view and said that today sports are not only an event rather it has turned into a platform where a vast career and scope is available. They said that only being a bookworm is not enough today and students should come forward and play for their college and then for their country.

More events need to be planned in such a way to spread Olympic Movement in INDIA.