Tiwari must give his blood sample for DNA test: Delhi HC 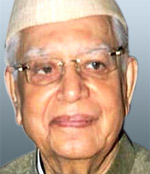 Slamming to veteran Congress leader Narayan Dutt Tiwari for continuously disobeying Delhi High Court's order of giving blood sample for DNA testing, Delhi HC on Friday once again stated that if Tiwari continues to refuse to give blood sample, it can be made compelled for him to do so.

The Delhi High Court had previously given direction to N D Tiwari for giving his blood sample to detect the paternity of Rohit Shekhar, a 32-year old, who had claimed to be his biological son few years ago.

A division bench of Acting Chief Justice A.K. Sikri and Justice Rajiv Sahai Endlaw said if Tiwari continues to refuse to give the blood sample despite the court's order, police force can be used against him.

It also allowed the appeal of Shekhar who had challenged the order of Justice Gita Mittal who in September 2011 said that Tiwari could not be physically compelled or confined for submitting his blood sample for DNA analysis.