Rekha's nomination for RS is not ordinary achievement: Mahesh Bhatt 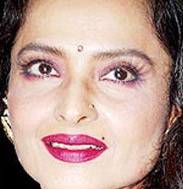 Active Bollywood actress Rekha has been nominated for a member of Rajya Sabha from the President's quota. The name of Rekha along with Sachin Tendulkar and others have been recommended by government for getting seats in Rajya Sabha from Presidential quota.

Expressing his joy over her nomination, Filmmaker Mahesh Bhatt has said that it is not an ordinary achievement and she has got honour from the government. She has a long way to go.

"I am happy that Rekha has made it to the privileged group of Rajya Sabha members. It is going to be a long journey for her," said Bhatt.

"It is no ordinary achievement for her. I am more happy because she belongs to our fraternity and they felt her worthy enough to be nominated," he added.

The president Thursday had approved the nominations of Rekha, along with ace cricketer Sachin Tendulkar and businesswoman and social worker Anu Aga to the Rajya Sabha.

Rekha, who has given some brilliant performances in films like "Khubsoorat", "Silsila","Umrao Jaan" and "Zubeidaa", will join the likes of lyricist Javed Akhtar and actress Jaya Bachchan as the member of the Upper House.

Other film celebrities, who have been a part of Rajya Sabha earlier include Nargis, Hema Malini, Lata Mangeshkar and Vyjayantimala.