Neem tree can be effective for HIV treatment 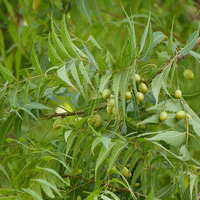 A recent study by Indian origin researcher has revealed that the extracts of neem tree that are found in abundance in the tropical and subtropical areas can help to prohibit the multiplication of virus.

Sonia Arora, an assistant professor at Kean University, New Jersey, is investigating the curative properties of the neem tree that can be helpful in fighting against the virus responsible for causing AIDS.

The initial results of the research have indicated that the neem extracts contains some specific compounds that targets a protein necessary for the replication of HIV. If the result of the further study remains favorable, it may provide the clinicians and drug developers, a new horizon for HIV-AIDS treatment therapy.

Moreover, the extracts of different parts of neem such as leaves, bark and flowers have been used across the Indian subcontinent against the pathogenic bacteria and fungi for years.

"The farther you go into the villages of India, the more uses of neem you see," said Arora.

The branches of neem tree are a great substitute to the toothpaste and toothbrushes to keep the teeth and gums healthy. In addition to that, the neem extract are also quite beneficial in controlling the spread of malaria.

The neem extracts are also recommended with a combination of other herbs for the treatment of cardiovascular diseases and diabetes in Ayurvedic treatment, a traditional and ancient form of Indian alternative medicine. The species name for the neem tree is Azadirachta indica and belongs to the mahogany family. The plant also grows in east Africa.

Arora has got expertise in the field of cellular biology of cancer, pharmacology, bioinformatics and structural biology. She started her laboratory at Kean University in 2008 with an insight to combine the depth of her knowledge with the natural products with special attraction to the neem tree.

Arora plunged into the scientific literature to know about the potential uses of the neem extracts. During her study, Arora came across two reports that revealed that when the patients of HIV-AIDS in Nigeria and India were given neem extracts, the amount of HIV particles in their blood reduced significantly.

After this finding she decided to find out the constituent of neem extract that made it capable to fight off the virus.

She took off to the bioinformatics and structural biology to find the information that can be gathered from making computer models of HIV proteins with compounds that are known to be present in neem extracts.

Arora and her team are now engaged in working on test-tube experiments to find the relevance of the computer models with actual samples.

If her research shows positive results, Arora is hopeful that the neem tree will give a cheaper and more accessible way to fight the HIV-AIDS epidemic in most of the developing countries, where current therapies out of reach of many people due to high cost of treatment.

"And, of course," she noted, "there is the potential of discovering new drugs based on the molecules present in neem."

Neem is very useful medicine. It is useful in each and every disease. Specially bacterial and fungal disease.