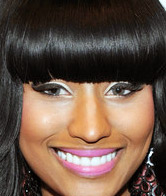 On Twitter the singer wrote: "And that's exactly why I'm paying the barbz DUST right now! And deleting my twitter. Smdh - don't cry for me Argentina. Like seriously, its but so much a person can take. Good f***ing bye. (sic)," reports showbizspy.com.

"On second thought I'll just follow a new set of barbz. The ones I follow r very mean and ratchet. *side eyes them* *looks into the sea for more* (sic)," Nicki Minaj added.