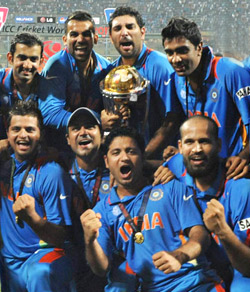 Indian cricket stars who had added a moment of pride for Indian Cricket, today are celebrating the first anniversary of winning moment via expressing their feelings on Twitter.

Sachin Tendulkar, Virendra Sehwag, Yuvraj Singh, Mahendra Singh Dhoni and Suresh Raina along with other team mates have twitted on microblogging site and thanked to their fans.

Most of the greets are coming for Sachin Tendulkar, Yuvraj Singh and Mahendra Singh Dhoni.

Sachin Tendulkar for whom winning the World Cup was a childhood dream, can't believe that the 12 months passed away, has twitted, "Time flies but memories last forever. What a day it was!!! 02-04-2011."

Indian opening batsman Virendra Sehwag twitted, "Can't believe its been a year since we were crowned the World Champs! Everyone contributed to the dream spcly the supporting fans! Thank you."

"A big hug to each and every team member including the support staff. A special thanks to the BCCI for being sensitive to our needs and providing us whatever we requested," Sehwag twitted.

India's splendid middle - order batsman Suresh Raina twits "Its a year already & the disbelief continues. The most special date of my life. That moment of euphoria Of madness. Of lifelong inspiration."

Last year on April 02, 2011 at Mumbai's Wankhede Stadium, Indian ODI team led by Mahendra Singh Dhoni defeated Sri Lanka in the World Cup final. The team dedicated the win to Sachin Tendulkar who could not hold his tears when he lifted the coveted World Cup 2011.