My time in Bollywood has just started, says John Abraham 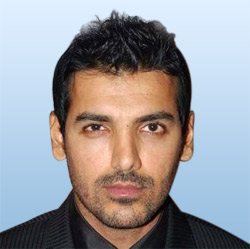 Actor John Abraham has said that 2012 may prove to be his year as he has a number of films to be released this year. "Vicky Donor", first film of his production house is also set for release this month.

"Everyone has their own time and I think my time has just started. In fact, I think that it might begin by the end of this year," the model turned actor said in an interview.

"Housefull 2" starring Johm will be released in theatres on April 5, he is shooting for films like "Race 2", "Dostana 2", "I, Me Aur Main" and "Shootout at Wadala."

The 39 year old actor expects to get third-time lucky with "Housefull 2", before that his movies like "Force" and "Desi Boyz" have done above-average business at the box office.

"I would like to thank Nishikant Kamath for bringing the change in my career. 'Force' actually changed a lot for me. After 'Force', 'Desi Boyz' was appreciated and I am confident that 'Housefull 2' will work and if it does it will be a good run for me," John has been quoted as saying.