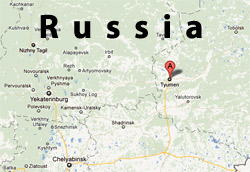 A mid-sized Russian aircraft bound to Surgut fell some two km from a village near Roshchnino Airport on Monday morning. There were 39 passengers and 4 crew members in the crashed plane in which at least 32 people were reportedly killed and 11 were rescued from the spots, Russian authorities informed to media.

According to Russian aviation sources, A UTair ATR-72 plane bound from Tyumen to Surgut crashed near the Urals city of Tyumen on Monday at 5.50 a.m. in a village, some 1,720 km (1,070 miles) east of Moscow.

The rescued operation team has discovered 11 injured people who were rushed to intensive care department in a nearby hospital through helicopter ambulance, media sources said.

A criminal case has been opened and rescuers have discovered both flight recorders on the site. The reason for the crash has not been identified yet, media sources reports.

The crash was the deadliest air disaster in Russia since Sept. 7, 2011 when a Yak-42 plane crashed into a riverbank near the city of Yaroslavl after takeoff on in which 44 people including Lokomotiv Yaroslavl ice hockey team members were died.