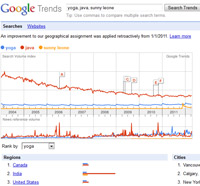 In the recent years the trend in the internet users in India has shown some astonishing signs in comparison to the global scenario. Compared to other countries of heavy and most frequent internet use net users in India is more engrossed in search for pornographic icons. Most interestingly, traditional healing sciences like yoga and Ayurveda has shown more signs of popularity in the developed nations of western hemisphere than in India where these sciences have been originated and had a history of development for thousands of years. Recent statistics over the frequency and density of internet searches in various search engines have indicated that the internet users in India are more vulnerable to the glaring world of pornography and celebrity news rather than traditional and natural sciences like yoga, Ayurveda and herbal remedies. As life style oriented diseases and disorders are continuously increasing and in many respect many of these diseases like obesity, diabetes, digestive disorders are reaching almost to epidemic proportion, the trend indicates to a situation where self-oblivion of own cultural roots and traditions are paving the way for disastrous consequences in health and life style. Let us see the frequency and density of internet searches like pornography, technology and healing sciences in the recent trends of Indian internet users and socio-psychological backgrounds preceding this trend.

Why developed nations are increasingly tending towards Natural Healing Sciences

Traditionally developed nations are the biggest users of internet and computer technology and pornography as a popular social expression of physical lust and sensuality has been originated in these countries and had been crucial in having grip over the postindustrial society for many decades. In the beginning pornography and semi pornographic entertainment were the means for fueling addiction in the working masses and this had been an elementary social trend for last few decades preceding the end of millennia. But with the dramatic increase in various social as well as psychic factors relating to the hyper reality of late capitalism, depression, traumatic syndromes, psychic complexity along with a wide array of various life style oriented diseases are taking epidemic proportion in the recent years this made a pivotal role in tending the population towards natural healing sciences of the orient. Our enquiry into the internet search trends for pornography, technology and healing sciences in the recent trends of the Indian internet users must consider these social factors that are crucial in shaping the mindset of the people in the developed nations in the west.

How pornography, technology and natural healing sciences in the recent trends of the Indian internet users are indicative of the present Indian psyche?

Presently the Indians who represent India in the global arena or technological development or any type of soaring achievement in the global picture are mostly educated citizens in the Cities. A considerable percentage of population outside of this locus is also regular or frequent users of internet thanks to the gigantic reach of mobile technology and internet in the country across demographic, economic and geographic distinctions. These two different types of internet users demonstrate varying trends of internet use and searches, indicative of different trends. But the most common trend that is dominant across socio economic boundaries is the interest for pornography and celebrity news. As the availability of internet facility in mobile devices and other technological instruments are in the mode of expansion to engulf almost all recesses of the society and as Indian mindset is traditionally known to be dominated by the repressive ideologies and social taboos regarding sex and sexual expression, internet became a great artifice for crossing and transgressing these social repressions and taboos. In the one hand the psychological repression for natural physical activities like sex have found an outlet to counter react through the new and continuously developing technologies and on the other hand global business focus on the emerging markets have found India likely to have the most potential buyers for internet commodities. These two factors constituted together shaped the search for subjects like pornography, technology and natural healing science of the recent trends in Indian internet users. 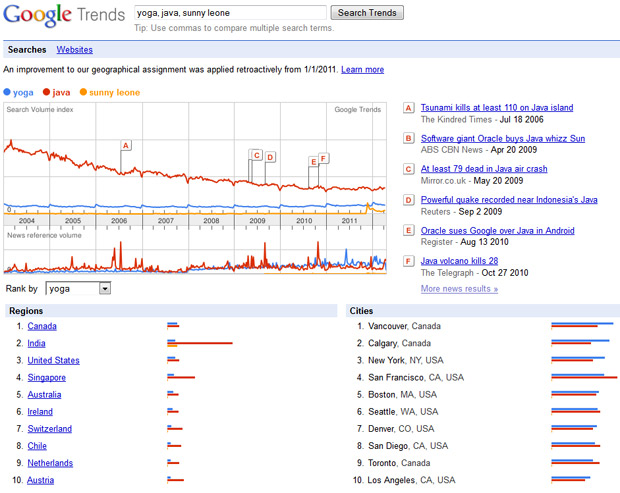 The recent statistics over the frequency and density of search for three different topics shown that The popularity of Porno star Sunny Leone in India far crosses the search topics like Yoga. Though as per the recent search trend data the popularity of Java as a search topic is a constant across India and other developed nations. In complete contrast in the developed countries of the western hemisphere yoga or other natural sciences have been more popular as a search topic than the interests for Sunny Leone and other pornographic contents. These statistics clearly shows the dominance of negative social as well as psychic trends in the users of internet in India.

In regard to the various search topics associated with pornography, technology and natural healing sciences in the in the recent trends of Indian internet users the psychic and social factors of internet use in India is clearly expressed and this serves as an alarm in respect to our self-oblivion of traditions and great scientific heritages.