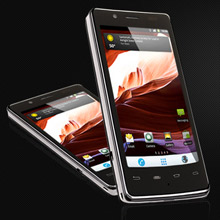 First smartphone ever to have Intel-Medfield platform, Lava Xolo X900, will hit the international market on April 23.

Intel is famous for its chipset and now it is giving competition to ARM in mobile processors too. This smartphone has a 1.6 GHz single core Atom processor that comes dipped with Intel hyper threading technology.

Lava Xolo X900 operates on Android 2.3 Gingerbread operating system but it will be later updated to Ice Cream Sandwich through OTA update. This smartphone will generate its power from a 1.6 GHz Intel Atom processor Z2460, Saltwell CPU with Hyper-Threading technology and 400MHz PowerVR SGX540 GPU and a 32-bit Dual channel LPDDR2 memory

Lava Xolo X900 has a 16GB of internal storage space and 1GB RAM.

Lava Xolo X900 sports an 8.0 Mega Pixel primary camera that can take pictures of resolution of 3264x2448. It comes with Digital Zoom and LED Flash. It also has a 1.3 mega pixel front camera that can be used for video calling. The camera has 10fps burst mode and 1080p video recording as well.

This smartphone is NFC (Near Field Communication) enabled and has Bluetooth, Wi-Fi facility to connect and share data with other devices. It also has GPS Navigation and Google maps.

It accepts a Micro-SIM.