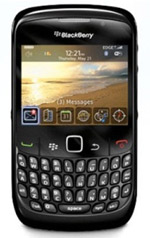 The leadership of Blackberry in technological innovations across the Smartphone market once again proved. The launch of Blackberry Curve 9220 as the new sensation in the affordable Smartphone segment is too predictable and much of the hype is created because of the reputation of Blackberry. The phone is launched causing much hope and expectation from the buyers those were waiting for a superbly featured blackberry at affordable rate.

Some of the distinct features like longer battery life, high density 2.44 inch TFT display, expandable memory up to 32 GB and popularly youth specific Blackberry features like QUADRA keypad and Blackberry Messenger put the Blackberry Curve 9220 as the new sensation in the affordable Smartphone segment.

Though there are many options for the youth buyer to choose from the array of affordable Smartphones with android platform and smarter features as well as applications, its blackberry specific applications are likely to make Blackberry Curve 9220 as the new sensation in the affordable Smartphone segment. The phone is priced at Rs.10,999, that according to industry observers is a bit higher in comparison to other feature rich phones in the same category.

Here are the features and Specifications of Blackberry Curve 9220

For youth aspiring to own a Smartphone with a Blackberry tag, this phone can be a cool choice.