Warne and Hurley to exchange vows in 2 countries 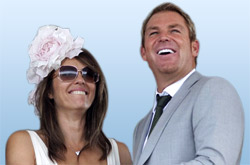 Cricketer Shane Warne and his fiancee Liz Hurley will exchange the vows in two weddings. These wedding will be held in Australia and in Britain, the couple reveals.

The celebrity couple also pronounced their pet names for each other in their first joint interview.

They revealed to Hello! Magazine that Warne is named as "Big Blond", while model and businesswoman Hurley is known by the pet name "Luna", in addition to other things.

"Elizabeth calls me a lot more than just the Big Blond - she has dozens of names for me, all of them too embarrassing to share," the Sydney Morning Herald has quoted Warne as telling Hello! Magazine.

"I have a handful for her, too, but I usually call her Luna as there was a terrible paparazzi picture of her once looming in to kiss me, which reminded me of the massive mouth at the entrance of Luna Park, the Australian theme park," the legendary spinner added.

The couple posed for the magazine in Sri Lanka said that the two celebrations will give chance to their family and friends to attend.

"We are very mindful of the fact that our loved ones live at opposite ends of the world," Warne has been quoted as saying.

While talking about Warne 46 year old Hurley said: "I am extremely happy when I'm with Shane. We are very similar in many ways. Despite differences in our backgrounds and careers, we both come from very secure, loving homes and to me that says a lot."

Hurley, who was formerly married to businessman Arun Nayar, declared her engagement to Warne in October 2011.